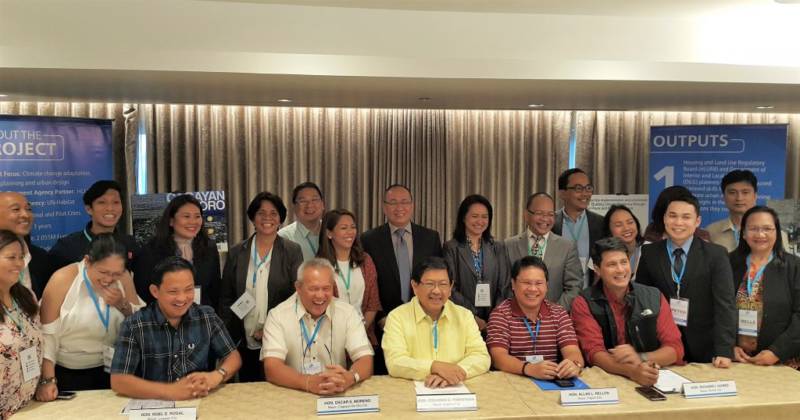 The convergence of climate change and rapid urbanization is a key development challenge Philippine cities face today. Considering this urgent development issue and the vulnerabilities of towns and cities, the Philippine government sees the need to strengthen the capacities of cities and urban centers to increase their resilience to climate change impacts and achieve sustainable development and improved quality of urban living.To demonstrate and build knowledge on innovative urban adaptation designs that could boost climate resilience, the “Building Climate Resiliency through Urban Plans and Designs” project partnered with five cities, namely, Angeles, Legazpi, Ormoc, Cagayan de Oro and Tagum. Legazpi City Mayor Noel Rosal acknowledged, “I agree that climate change is a development issue and also a continuing learning experience.” Mayor Edgardo Pamintuan of Angeles City, also current president of the League of Cities of the Philippines (LCP), stressed that “while we have a lot to share with our partners, there is certainly a lot more to learn in return and this is where our enthusiasm in this project is anchored.”In outlining the project framework, UN-Habitat Country Programme Manager Cris Rollo welcomed the mayors as key partners of the project with important roles in achieving project results. Cagayan de Oro City Mayor Moreno acknowledged the challenge to the 5 partner cities, selected from an initial list of 71 cities and further whittled down to a shortlist of 26, to be the urban laboratory of innovative approaches and committed the city to work and deliver results.In the signing ceremony held last 24 August 2017 in Makati City, Philippines, mayors of the five cities declared their support to implement t the project, ensure the participation of their respective stakeholders and vulnerable communities, collaborate with and complement efforts of the national government in enhancing policies and programs to address the causes and effects of climate change and urbanization, enrich knowledge sharing, and take the lead in pursuing local actions promoting climate resilient urban adaptation plans and designs.

Secretary Emmanuel De Guzman of the Climate Change Commission (CCC), Director Anna Bonagua of the Bureau of Local Government Development (BLGD) of the Department of Interior and Local Government (DILG), Commissioner Melzar Galicia of the Housing and Land Use Regulatory Board (HLURB) and Deputy Director Veronica Hitosis of the League of Cities of the Philippines (LCP) witnessed the signing and expressed support to the project.Tagum City Mayor Allan Rellon echoed the messages of the partners saying “May this project improve our knowledge and equip us with the right tools to plan wisely and develop the city to implement sustainable urban development plans and designs as this is our declaration of commitment, and we commit. We are looking forward for a fruitful partnership with you and I shall declare this is another TAGUMpay (success) for Tagum City.”

A work planning workshop with the technical staff of the partner cities and the Regional Directors of the HLURB fleshed out initial plans for the project at the city level.

The “Building Climate Resiliency through Urban Plans and Designs” project is part of the International Climate Initiative (IKI). The German Federal Ministry for the Environment, Nature Conservation, Building and Nuclear Safety (BMUB) supports this initiative on the basis of a decision adopted by the German Bundestag.