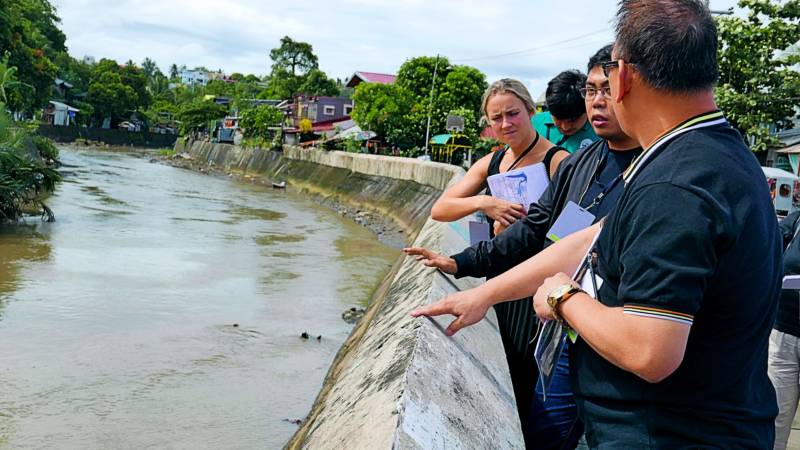 31 March 2020, Manila. Climate change is an urban health issue. The connection between climate change and health is widely studied, with urban residents facing some of its most adverse impacts. For example, people in urban areas are exposed to higher than average temperatures caused by urban heat stress. This is a result of increasing temperatures compounded by how urban centers are designed and built. The same people are exposed to toxic air and susceptible to stress (especially in car-centric urban centers with limited green and open spaces), which aggravate the health implications of extreme heat exposure. The elderly, individuals with pre-existing conditions, the urban poor in highly dense slum areas, and those who work outdoors (e.g. construction workers and street vendors) are particularly vulnerable to the effects of heat stress. Urban dwellers are also at risk of water-borne diseases exacerbated by excessive rainfall and flooding, particularly in communities with poor water and sanitation facilities and poor waste management.

In the midst of a new pandemic, we are reminded of another life-threatening aspect of climate change: how it can accelerate the development and transmission of infectious diseases. Pathogens (i.e. viruses and bacteria) and their vectors (e.g. mosquitos) are known to propagate in favorable temperatures, while precipitation and wind affect their transmission. For instance, studies show that temperatures 30C and above shorten the breeding period of dengue mosquitoes. This was the case in Ormoc City in Leyte from 2016 to 2017. From only 63 cases the previous year, dengue cases jumped to 469, a growth attributed to temperature increase.

Climate change and the expansion of cities also amplify the prevalence of “zoonotic diseases”, or diseases transmitted from animals to humans.

As the earth continues to warm, scientists forecast the movement of wild animals and vectors to colder climates, “bringing hosts, vectors, and diseases currently restricted to the tropics within the range of temperate population centers” (Mills et al, 2010). The outward expansion of cities puts pressure on existing natural habitats, fragmenting them and changing their composition. Oftentimes, most of the wildlife die off or are driven away, but those that move in, remain, and proliferate – like roaches, rats and other rodents – become vectors for the transmission of human diseases. Studies also suggest that a decline in some predator species contributes to the rise of parasites and subsequent parasitic infections.

"In the midst of a new pandemic, we are reminded of another life-threatening aspect of climate change: how it can accelerate the development and transmission of infectious diseases."

Currently, we are also seeing unprecedented levels of migration among people due to climate change. Entire communities are losing their homes, food supply, and livelihoods to extreme weather events and sea-level rise, but their subsequent movements are often from one place of vulnerability to another. Relocation to urban areas is common, where lack of adequate housing increases the likelihood of worsening disease outbreaks. Overcrowding in slum areas facilitates the spread of infectious diseases. Displaced populations are therefore more susceptible to illnesses because of poor health aggravated by poor living conditions.

The COVID-19 pandemic has rendered large cities all over the world unprepared for its rapid spread. Although much is yet to be discovered about the virus and disease, it is clear that climate-resilient urban planning and design could help reduce the impact of diseases particularly on vulnerable populations.

One way to address increasing heat is by carefully planning street patterns of growth areas with respect to sun and wind directions, and optimizing building heights and massing along their edges to shade public areas. For existing urban areas, the most effective way is to incorporate more parks and open spaces into the urban grain, and ensure that people are able to use them for recreation. If adequately designed, these open spaces act as both ‘wind corridors’ that dissipate heat from the center of the city, and relaxation areas where people can ‘cool-off’ and escape increasing heat.

Studies show that green spaces and being near nature are beneficial to people’s mental health. Parks and other open spaces are conducive to rest, recreation, and social interaction: elements necessary for good health and well-being. These spaces must provide adequate seating, restrooms, and trash cans, which are all important to health and sanitation.

Flooding and water scarcity are other climate-related issues affecting people’s health that need to be considered when building resilience. Flooding due to increased rainfall can be addressed at the neighborhood level by reducing water runoff from impervious surfaces. According to Mr. Reinero Flores, BCRUPD National Project Coordinator, “Rainwater harvesting for non-potable domestic use is a simple technique that can reduce both flooding and the demand for increasingly scarce water resources. Stored rainwater can also act as reserve supply during drought periods and emergencies.” Another way is to increase permeable surfaces within urban areas to help minimize flooding while at the same time recharging our aquifers. Well-designed sustainable urban drainage systems ensure that disease-vector-breeding-ground stagnant water areas are minimized, and that our groundwater resources are recharged and maintained.

People living in climate-responsive cities also benefit from reduced car-dependence. By promoting optimal density and mix of uses within neighborhoods, the population’s dependence on private transportation is reduced. Walking and bicycling can be encouraged in these cities by providing well-built infrastructure such as foot paths and bicycle lanes. Studies show that an active lifestyle protects individuals from heart disease and obesity, while exercise is believed to help alleviate depression. Less vehicular emissions and more trees improve air quality and lower people’s risk of contracting cardiorespiratory diseases.

Urban gardening within cities contribute to better urban health as well. Architect Louwie Gan, BCRUPD Urban Design Expert, states that “access to healthy food supply growing in community gardens during the present COVID 19 pandemic would not only build resiliency, but also help soften the impact of the community quarantine on people’s health.”

The benefits of urban gardening are well-known and are being integrated into BCRUPD pilot projects. The demonstration projects currently being designed by Ormoc and Legazpi City’s technical working groups, for instance, incorporate “edible landscaping” into their plans as an innovation that can help their communities develop resilience to the negative effects of climate change to their food supply.

A well-designed, climate-resilient, compact city has built-in advantages especially during crisis situations like the current outbreak of COVID-19. “Because of its smaller footprint, the delivery of essential services to and within compact cities is simpler and more efficient. Patient contact tracing, quarantine, and monitoring operations are easier to enforce. Less resources are required to keep emergency services running, and the national health infrastructure is less likely to be overwhelmed. People’s vulnerability to additional health risks is mitigated and the negative effects of the pandemic are minimized,” Architect Jose asserts.

Climate change is threatening the viability of our cities and our health and well-being. While we try to slow its progress, we should also ensure that we are preparing for its effects while we still have time. Cities and the number of people who live in them will continue to grow in the foreseeable future. The current pandemic shows us that we need to shift our thinking and change our practices to ensure that this growth will not be business-as-usual but responsive to our challenges, so that people can remain strong, healthy and happy. Planning for climate resilience is planning for health.