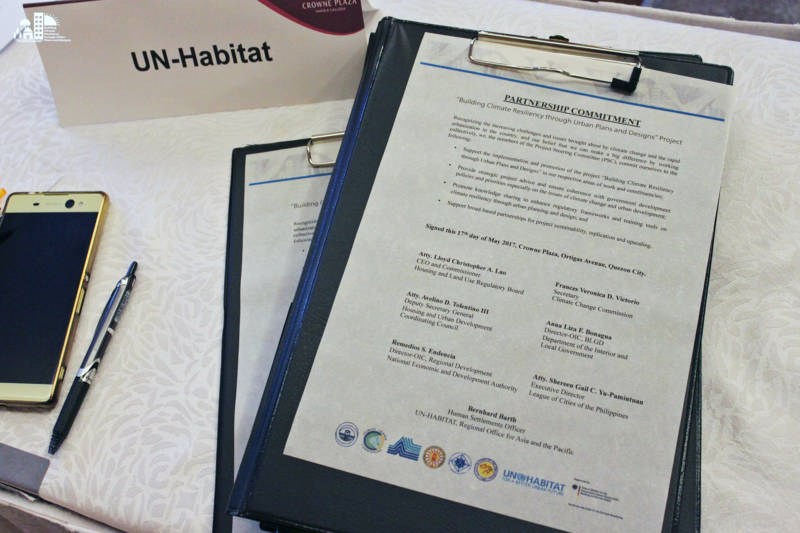 Responding to the compelling challenges of rapid urbanization and climate change, the project “Building Climate Resiliency through Urban Plans and Designs” was launched on 17 May 2017 led by the Housing and Land Use Regulatory Board (HLURB) Commissioner and Chief Executive Officer Lloyd Christopher Lao together with key government agencies involved in planning for urban development and climate change. The project aims to support the Philippine government in improving policies, regulations and capacities of national and local government to adapt to climate change through the promotion of climate-responsive sustainable urban development plans and designs. This initiative supports the government’s goal of achieving a resilient and sustainable Philippines as articulated in the Philippine Development Plan and detailed in the National Climate Change Action Plan (NCCAP) and the National Framework and Strategy for Climate Change (NFSCC). Five cities with different ecosystems will be selected to develop diverse and compelling cases for increasing climate resilience through urban adaptation design tools and models. The project will run for three years starting March 2017 with UN-Habitat as the main implementing partner.  This project is part of the International Climate Initiative (IKI). The German Federal Ministry for the Environment, Nature Conservation, Building and Nuclear Safety (BMUB) supports this initiative on the basis of a decision adopted by the German Bundestag.

Highlighting the event was a commitment signing by members of the Project Steering Committee, chaired by the HLURB and composed of key government agencies namely the Department of Interior and Local Government (DILG), National Economic and Development Authority (NEDA), Housing and Urban Development Coordinating Council (HUDCC) and the League of Cities of the Philippines (LCP) and UN-Habitat. The Project Steering Committee serves as the project advisory group providing strategic guidance and ensuring coherence with government’s policies and programs on climate change and urban development.

In her keynote message, Ms. Ana Ventura representing the German Embassy highlighted that the project is expected to make significant contribution towards improving the capacities of the government by promoting and implementing sustainable urban development plans and designs. Atty. Lao stressed that “planning is essential, and it is not just about building, but planning wisely on what to build and where to build.”

An interactive inception workshop with various national government agencies, NGOs, academe and the private sector followed the launch. The participants discussed the detailed work plan and identified points of collaboration, convergence and synergy on the various ongoing and planned climate change projects and actions.