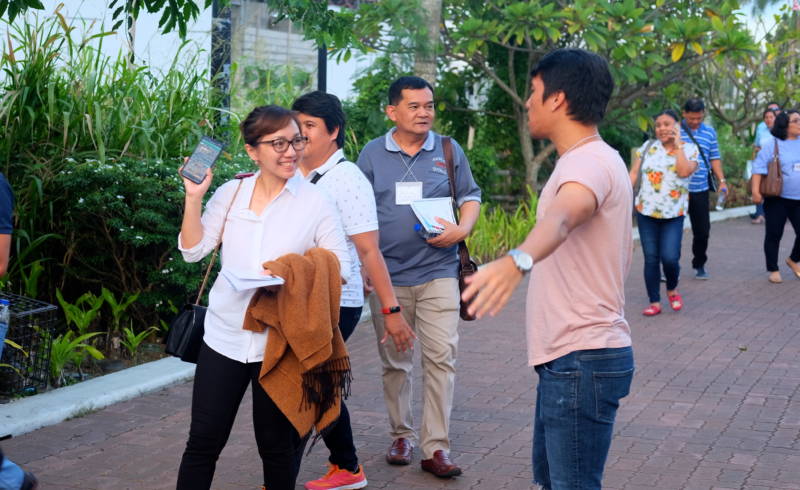 A field exposure held on 6–7 November 2018 in Iloilo City convened at least 50 participants from five partner cities of the Building Resiliency through Urban Plans & Designs (BCRUPD) Project, with representatives from the following national partners: Housing and Land Use Regulatory Board (HLURB), Climate Change Commission (CCC), Department of Interior and Local Government (DILG), National Economic and Development Authority (NEDA), Housing and Urban Development Coordinating Council (HUDCC), and the League of Cities of the Philippines (LCP).

The principal purpose of the event was to facilitate knowledge sharing among national and local partners on their experience of urban climate actions, lessons learned, and recommendations, using a site visit showcasing Iloilo City’s climate initiatives as catalyst for the discussions.

Day 1 of the event featured a detailed presentation by  Butz Peñalosa, Iloilo City’s Planning and Development Coordinator, on the climate adaptation initiatives that were brought to bear in Iloilo City. In the afternoon, everyone was taken on a tour of key intervention sites, beginning with heritage site Molo Mansion and ending with the Iloilo Riverbank Esplanade, a project that has earned the city renown nationwide.

On Day 2, two design sprints were held for peer assessments as the five partner cities of Angeles, Cagayan de Oro, Legazpi, Ormoc, and Tagum each presented its proposed urban design project (an output of the BCRUPD project) for feedback from other cities.

“Tagum City’s emphasis on securing social acceptability to ensure sustainability of Ormoc’s proposed comprehensive parks development resonated with us,”remarked Engineer Raoul Cam from Ormoc City. “They also pointed out that integration of environmental laws into zoning ordinances was important. We also got ideas from the design concepts of the urban greening projects presented by Legazpi City and the linear park development presented by Cagayan de Oro City, because we do share some of their climate trends and impacts.”

Engineer and environmental planner Miladee Azur of Legazpi City said, “Angeles City helped us revisit our policy for putting setbacks so we can implement the project properly. Our discussions were mainly on cultivating social acceptance of the projects, especially by lot owners that would be impacted by the project, those along the major thoroughfares.”

"Before we came here, we already contemplated reviving two river systems which are now just trash dumping areas. We want to have them revived and reintegrated into the urban system. We can apply the concepts demonstrated by Iloilo in their esplanade.”—Miladee Azur, Legazpi City

A walk along Iloilo’s river esplanade triggered ideas as well. “Mr .Peñalosa said that they had the river zoned according to multiple categories - economic, production, recreation,” Ms. Azur recalled. “We could also do that for our major river systems. Before we came here, we already contemplated reviving two river systems which are now just trash dumping areas. We want to have them revived and reintegrated into the urban system. We can apply the concepts demonstrated by Iloilo in their esplanade.”

Tagum City Architect Louella Apurada shared that Legazpi’s feedback on common utility posts and solid waste management was something she and her LGU colleagues really listened to. “Because if our solid waste disposal is ineffective,” Ms. Apurada stated, “our mangroves will really get affected.”

“We also want to replicate some concepts from Iloilo’s development of the esplanade. Right now, the direction of the Department of Public Works and Highways is developing flood controls and there is national funding for that. We’re thinking of Hijo River for this initiative; we want to integrate an esplanade and replicate the Iloilo’s  watergates and gate valves in its river system.”

Development Management Officer Jasper Jacildo of Cagayan de Oro City vividly called to mind Ormoc’s emphasis on stakeholder participation even as early as the planning level. “Up to this point,” Mr. Jacildo shared,  “we were so focused on the soft infrastructure we planned on developing for our parks. But Ormoc’s discussion on stakeholder involvement even prior to implementation of the project made us realize that we needed stronger stakeholder buy-in and sense of ownership, so now we’re planning to develop more  IEC materials.”

“The Iloilo River Esplanade was definitely one of our inspirations in coming up with our project (urban greening which included major riverbanks),” continued Mr. Jacildo, “And seeing it up close affirmed one of the things we wanted to see in CDO: bringing people back to the river. The development of Iloilo’s esplanade had support from as high as the senate and the city’s leadership was very motivated. That’s definitely something we’ll be looking into, especially since local elections are upcoming. We need to implement  mechanisms to sustain the continuity of the project even after the present local administration.”

Angeles City Disaster Risk Reduction Manager Francis Pangilinan cited Cagayan de Oro’s recommendations as something Angeles would act on in their urban cooling project, which has the heritage district at its center: “We already have the heritage council, but we need to more strongly engage with stakeholder outside the council to ensure sustainability of the project. Like the academe.”

“Our project entails so many components,” Mr. Pangilinan added. “So definitely we need to invest for its maintenance and trained personnel. At the same time we need to train people. Other cities suggested that we need to expand the numbers of people in the local government who share this advocacy and exert more effort in marketing the project to decision makers.”

Bringing Something to the Table

While reception to other cities’ feedback and recommendations was wide and welcome, cities were just as cognizant of their own strengths and what they could contribute to other cities.

“Ormoc has a lot of ecosystems: forest, urban, coastal, agriculture, and production,” said Mr. Cam. “We can share our experience in handling complex land use plans for multiple ecosystems.”

Legazpi, on the other hand, was proud of their efforts in integrating smart and climate resilient technologies and looking to homegrown and natural interventions to enhance resilience.

Tagum City’s establishment of a city architect’s department was a pioneer initiative that other cities could emulate.

“Cagayan de Oro is poised to be a metropolitan area,” Mr. Jacildo remarked. “And we have done feasibility studies on the  different areas for metropolization. We would be happy to share them with other cities. Cagayan de Oro is also a logistics hub, so that would be an interesting perspective to look at in terms of best practices.”

Angeles, having the most unique topography from its brethren cities, being flat, land-locked, and with no major river systems, can draw from experiences inter-LGU collaborative development, specifically on how its climate actions affect adjacent cities and municipalities and vice versa.

While the design sprint was done by cities, national partners looked on as advisors, the entire process feeding into their efforts to improve climate-resilient planning regulations and spatial and sectoral planning capacities.

Evelyn Castro, a national trainer at DILG’s Bureau of Local Government Development, enthused over the pilot cities’ proactiveness in applying climate adaptation principles to their proposed projects. She shared that the project was able to show cities how national government can further support them, especially cities with limited resources.

“National government agencies could work towards collaborating more to harmonize their respective mandated plans that local government units work on... Two outputs but one continuous process. Moving forward we have to look at this possibility.” — Rose Marie Bermejo, HLURB Western Visayas Regional Office

Ana Mirador of HUDCC’s Policy Development, Legislation, and Special Projects Group, admired how cities were now able to link climate change to a broader spectrum of impacts that included health and urban heat, for example, and not just to natural disasters. She did add that a stronger sense of foresight and longer term planning were needed to ensure that the projects were seen through to their completion regardless of changes in local leadership.

To close the event, Rose Marie Bermejo of HLURB’s Western Visayas Regional Office commended the cities for their stellar performance. “National government agencies could work towards collaborating more to harmonize their respective mandated plans that local government units work on,” Ms. Bermejo remarked, referring to the Comprehensive Land Use Plan and the Comprehensive Development Plan, two national plans overseen by the HLURB and DILG, respectively, which cities are mandated to develop and update and for which the project is strongly advocating integration of climate adaptation.  “Two outputs but one continuous process,” Ms. Bermejo continued. “Moving forward we have to look at this possibility.”

BCRUPD is part of the International Climate Initiative (IKI). The German Federal Ministry for the Environment, Nature Conservation, Building, and Nuclear Safety (BMUB) supports this initiative on the basis of a decision adopted by the German Bundestag.