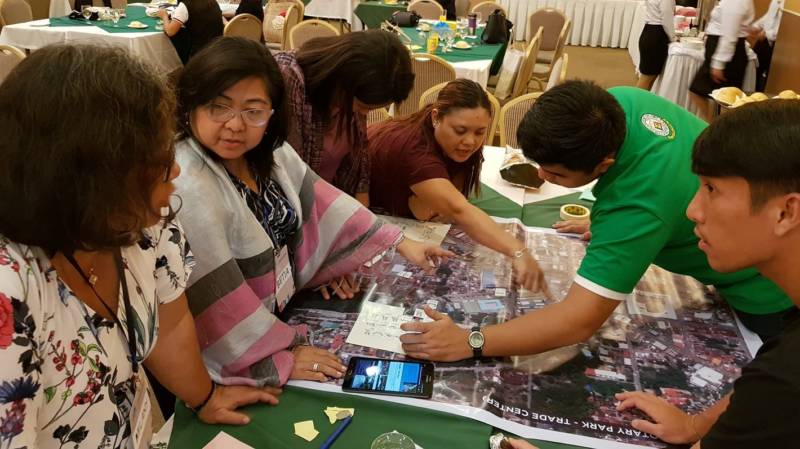 A field exposure and learning exchange activity was held in Tagum City on 11-12 September 2019. It gathered participants from the five partner cities of the Building Climate Resiliency through Urban Plans & Designs (BCRUPD) Project and representatives from the following national partner agencies: Housing and Land Use Regulatory Board (HLURB), Climate Change Commission (CCC), Department of the Interior and Local Government (DILG), National Economic and Development Authority (NEDA), Housing and Urban Development Coordinating Council (HUDCC), and the League of Cities of the Philippines (LCP).

The knowledge exchange intended to facilitate dialogue on the cities’ experiences and learnings on climate resilience through urban planning and design, to enhance the cities’ identified projects, and to serve as input and proof-of-evidence to the development of the national guide on climate resilient urban planning and design, one of the main outputs of the BCRUPD project. The two-day programme emphasized peer-to-peer learning.

On Day 1, Architect Herbert Jose and Ms. Laids Cea of UN-Habitat discussed the elements of climate resilient urban design. Then, over the two-day session, the partner cities presented their climate assessments and the pilot projects they are working on for feedback from other cities and government agencies. Prior to the event, the local and national partners underwent mentoring on the significance of the Climate and Disaster Risk Assessment (CDRA) and the creation of the CDRA dashboard. During the learning exchange, Mr. Jasper Jacildo from Cagayan de Oro expressed how an in-depth CDRA process proved useful:

"It taught us a lot. There was a big change on our part because before we only concentrated on one area/physical project, but now it is a holistic approach, a climate change project through a concept. There were LGUs discouraging us from this but then we became more pro-active about the results because we were not only concerned about the current generation but also the generations to come."

Another highlight of the learning exchange was the visit to select Tagum sites on Day 1 which further enriched the participants’ climate perspectives. The participants were divided into two groups and visited the flood-prone barangays of Pagsabangan and Busaon before converging at Tagumpay Walk. Tagum City provided tablets for easy access of information about the sites, routes to take, and guide questions to maximize the learning experience.

Day 2 was similarly productive with the continuation of the city presentations and a learning exercise to process the site visits from Day 1. The groups came up with suggestions to address risks and build resilience in their assigned areas based on CDRA findings and their observations from the day before. Suggested improvements include elevating access roads, use of heat-reflecting materials, and conservation of natural mangrove habitats.

Additional information-sharing took place in the afternoon of the second day. Ms. Laids Cea presented updates on the national guide on climate resilient urban plans and designs. This was followed by an introduction to climate finance by Commissioner Rachel Herrera of CCC and Ms. Nene Narvaez of UN-Habitat. It was a useful addition to the learning exchange because the proposed projects will be showcased to possible funders in January. Lastly, Atty. Angel Aguila of HUDCC brought the participants up to date on the establishment of the Department of Human Settlements and Urban Development (DHSUD).

In an interview shortly after, CCC Commissioner Rachel Herrera said she was impressed with what she witnessed in the two-day activity.

"I can sense the confidence in the city representatives, their planners, their trade officers. I would like to congratulate UN-Habitat for leading this and really hand-holding our LGUs. I suppose this is the example of an end-to-end kind of technical support that we can give. Not just downloading a tool but mentoring them on how to use it and facilitating knowledge exchange."

The city government of Tagum warmly hosted the learning exchange and was in constant collaboration with UN-Habitat for its Tagumpay (success).