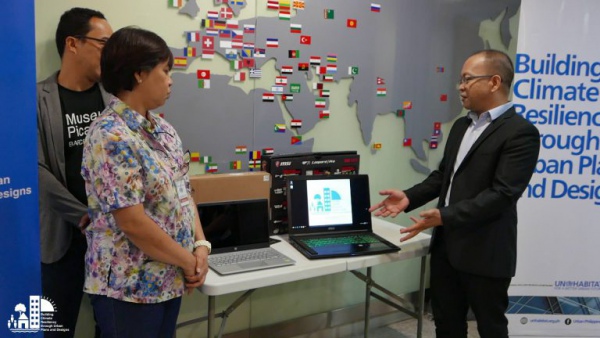 The “Building Climate Resiliency through Urban Plans and Designs” project aims to support the Philippine government in building capacities on innovative climate-responsive planning and designs. As part of this support,  UN-Habitat handed over equipment to the Housing and Land Use Regulatory Board (HLURB) on 15 September 2017 led by UN-Habitat Country Programme Manager Christopher Rollo. Policy Development Group Director Nora L. Diaz led the HLURB team in accepting the equipment.

The HLURB, as the lead government agency partner of UN-Habitat for the project, will use the equipment, comprised mostly of laptops installed with geographic information system (GIS) applications, to train local government planners in developing computer-aided GIS-based urban plans and designs.

“An important part of the partnership is to assist the work of the HLURB,” Mr. Rollo says. “The computer equipment will therefore support the project in a way that will help the cities we will be working with in the long run.” This view was shared by Ms. Diaz who also added that the support is, “not only for the PDG (Policy Development Group) but for the cities and eventually (for) all our regional planners and local government units  in the country.”

Other key government partners of the project are the Climate Change Commission (CCC), Department of Interior and Local Government (DILG), Housing and Urban Development Coordinating Council, National Economic and Development Authority (NEDA), and League of Cities of the Philippines (LCP).

The five partner cities of Angeles, Legazpi, Ormoc, Cagayan de Oro, and Tagum, which serve as the project’s demonstration cities, aim to strengthen the coordination and processes among stakeholders and national government agencies in improving policies, regulations, and capacities to adapt to climate change through the promotion of sustainable, climate-responsive urban plans and designs.

The project is part of the International Climate Change Initiative (IKI) and supported by the German Federal Ministry for the Environment, Nature Conservation, Building and Nuclear Safety (BMUB), on the basis of a decision adopted by the German Bundestag.